The Church of Saint John the Baptist 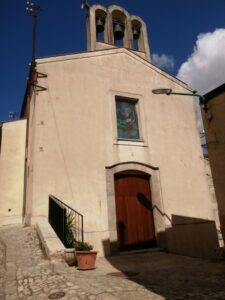 The Church of St. John the Baptist was built around 1633. It has two side arches containing the simulacra of St. Rita and St. John the Baptist with a lamb under his left arm with the inscription ‘Ecce Agnus Dei’ (Behold the Lamb of God). At the same time, he holds a red banner on his right, symbolising the victory of martyrdom. On the high altar is the statue of the Holy Crucifix.
A folk tradition associated with this church is the so-called ‘U Pagliaru di San Giuvanni’ on the eve of St. John’s Day, during which a haystack (“U Pagliaru”) is burned. Not long ago, young people, betting on who was the bravest, would jump, alone or in pairs, onto the high burning flames of the haystack. Such bonfires at the end of June have a purifying purpose: to destroy the evils of the previous period and defend oneself from those of the new season.