The Church of Santa Anna 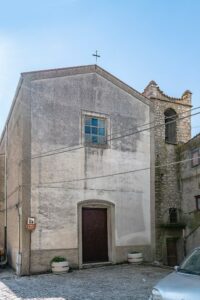 The Church of Santa Anna, previously called Santa Maria, was built in 1600. The bell tower is of ancient construction, presumably one of the watchtowers of the ancient settlement.
The church has a single nave with side chapels. On the right are the chapels of Saints Cosmas and Damian and Pope St. Sylvester. On the left are two chapels: one has a painting by an unknown author representing The Good Death. The other chapel is dedicated to the Immaculate Virgin, mistakenly called Matri Sant’Anna.
The wooden simulacrum on a plaster pedestal is also by an unknown author. From its iconographic features, it would seem to resemble the image of the Immaculate. However, the absence of the starry mantle and the serpent crushed under the Virgin’s feet (typical of Immaculate iconography) leaves the identity of the simulacrum open to question.
The church also keeps a ferculum used with the Risen Christ on Easter Day in the “Incontri” (meetings) that take place in the various town squares. On the high altar is a large painting depicting the Nativity of Mary.