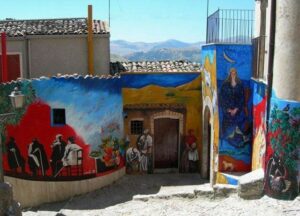 The murals date back to 16th September 1989, when the local administration invited three Sicilian artists to paint some of the walls of Spiazzo Sparacio, located in the heart of the historic centre. These painters were Franco Nocera from Monreale, Totò Bonanno from Lercara and Mario Bardi from Palermo.
From that moment on, Spiazzo Sparacio has become an open-air museum, a landmark for the people of Prizzi and visitors alike. It represents one of Prizzi’s most evocative views.
The walls became a symbol of our forefathers’ culture. he three decided to depict a typical Sicilian scenario between the 19th and 20th centuries, reproducing traits of our culture, customs, and traditions. In fact, each person wears typical clothes of the past (such as the coppola, the old coat, etc.).
Mario Bardi depicts Sicily’s memories of the past. He portrays a group of men in the shade of a tree, sitting in their neighbourhood and chatting in the Prizzese dialect.
Totò Bonanno depicts the work of the fields of past life. In fact, one can note the threshing floor with the mules, the rich harvest, the farmer’s wife (typical symbol of the Sicilian woman) carrying a jar to relieve her companion’s thirst, and the joyful flask of wine.
The mules’ threshing floor and the good harvest are important in this depiction because they remind us of wheat.
Franco Nocera represents the season of love by depicting two women, one dressed in gold, symbolising the awakening of the senses, and the other dressed in blue representing the queen of Eros, i.e., love. Symbolically, this third painting denotes the awakening of love. Between the women appears the figure of a man, a Saracen, handing a bouquet of flowers to the queen. 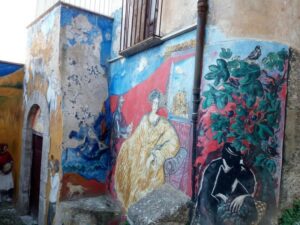