The Church of Saint Sebastian 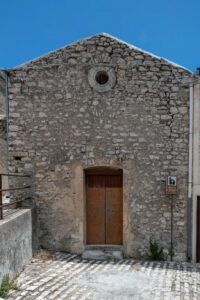 Built on a previous religious structure before the 16th century, Saint Sebastian Church stands in the highest part of the village, next to an ancient gate that led to the Byzantine fortification. According to local tradition, it appears to be the first church built in the village. The modestly sized building has undergone several modifications and reconstructions over the centuries. It collapsed in the 1950s. The bases of the vault and the remains of stucco on the walls can still be seen today. It houses a white marble stoup, held by a hand, and attributed to the Gagini school.
The Church keeps the statue of Saint Sebastian, standing on his left leg, with his right leg slightly bent as in Renaissance poses. Although he is about to die, his gaze is tender and sweet and does not seem to emphasise even a hint of anger or vengeance towards his murderers. On the contrary, he seems to have already forgiven them.