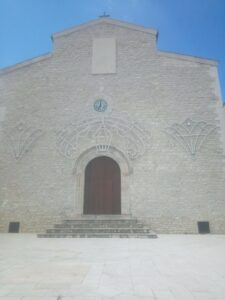 The Mother Church was built on the ancient church of S. Giorgio Martire, founded by Giovanni Chiaramonte around 1303. It was among the first religious structures in Prizzi. Around 1500, due to population growth, the Church of S. Antonio (ancient Matrice) was insufficient to accommodate the faithful. Thus, the Villaraut family commissioned the construction of the new Mother Church in 1508. The following year, Carlo Villaraut died, and work was suspended and resumed by his nephew after almost 50 years, in 1550. In memory of Charles, the coat of arms of the noble family was inserted into the façade. Finally, in 1561, the work was completed, and the church was dedicated to St George, whose statue stands vigorously on the high altar. He is depicted on foot with a helmet and armour, the palm of victory in his right hand and a red banner in his left hand.
In classical iconography, the saint is represented on horseback being a Roman officer, but in Prizzi, the statue is without the horse. This is because, according to a popular legend, Saint George came to Prizzi and, seeing it was on top of a mountain, decided to go up on foot. The altar on the left aisle is dedicated to the Blessed Sacrament, while the one on the right is to The Most Holy Rosary of the Blessed Virgin Mary. One can see the 16th-century portal made of meticulously worked hard stone on the way out.
In 1793 an earthquake destroyed the church. Almost all the statues, except for St Michael Archangel and St Peter, were destroyed. During recent restoration work on the church, traces of pictorial decoration covered by a thick layer of plaster dating back to the early 19th century were brought to light. The frescoes are presumably dated between the 14th and 16th centuries; they depict an investiture in the side wall and a column on the front wall. The right pillar contains a fresco of a saint