The Holy Mary of Graces Church 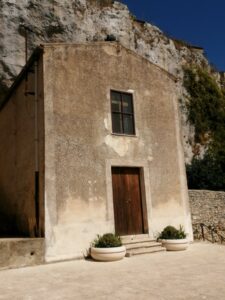 The Holy Mary of Graces Church is very characteristic.
It was built around 1620, west of the town, attached to a cliff about 50m high. It has a modest churchyard, and the door faces west.
A small bell tower called ‘Campanareddu’ was built above the rock.
On the high altar, you can admire a fresco of the Holy Mary with Infant painted on the rock.
It is the Virgo Lactans of Byzantine style. This fresco is defined as ‘ACHEROPITE’, i.e. not painted by human hand, but the result of divine intervention. Legend has it that a shepherd boy, taking his flock to drink, saw one of his sheep fall into a pond. He invoked the help of Our Lady of Graces, who appeared to him and granted him the grace to save the animal. After the apparition, the shepherd boy, enchanted by the woman’s beauty, knelt to pay her homage, and asked how he could thank her.
Our Lady, leaving her image imprinted on the rock, asked the shepherd boy to build a church there in her honour, so that every believer could venerate her and ask her for graces.