The Church of Saint Calogero 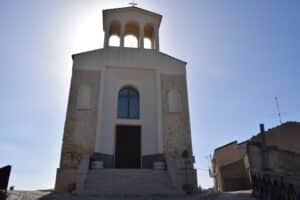 The construction of the church began in 1597 and was completed in 1722. It is on a high mountain called Calvary, where stands the wooden cross where Christ is crucified on Good Friday. On the high altar is the statue of Saint Calogero, the saint who evangelised Sicily during a long period of plague.
To feed the poor, the saint begged for bread that people threw out of their windows to avoid being infected.
Hence the widespread practice of having bread blessed during the mass on the saint’s feast day.
As in classical iconography, the statue of the saint is accompanied by a deer. According to the tradition, as he could no longer gather herbs to feed himself during his old age, he only ate the milk of a deer sent to him by God. On the right is the painting of Our Lady of Sorrows, and on the left is the Sacred Heart of Jesus statue. After a long restoration, the church was reopened in June 2016.