The Church of Saint Anthony 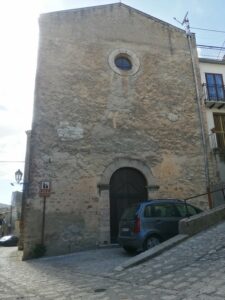 The Church of St. Anthony was built around 1150 during the Christianisation years of the Norman Bonello family. It was reconstructed with a single nave in 1656. The church’s bell tower was originally one of three watchtowers and is topped by a dome with Arabic references.
Upon entering the church, one is struck by the marble statue of the ‘Madonna and Child Jesus’, known as the Annunziata, which dominates the niche of the high altar. It was probably a gift from the Villarauts, an important family of the time. It is a work of immense artistic and cultural value, sculpted in 1646 and attributed to the Gagini school. Three small bas-reliefs are sculpted on the pedestal: on the right, a man receiving a blessing from St. Anthony; on the left, two nuns receiving it from St. Benedict and in the centre, the Annunciation.
On one’s entrance are two altars to the right and two to the left; the first is of St. Mark the Evangelist, the second of the Holy Virgin of Hydria (chapel 1650). The wooden sculpture is of exceptional historical-iconographic value: in the centre is the Madonna and Child, and at the sides are statues of two Basilian monks, the so-called Calogeri, vulgarly called ‘vicchitti’.
Other details include the pulpit from where the word of God was delivered during the service and a pipe organ dated 1677. The stoup depicting St Anthony blessing some animals is presumably also of the Gagini school