The Church of Holy Mary of Carmel The Latin cross church was built by the Bonellos in 1150. It was refurbished in 1638 by the Carmelite Fathers on the site of the ancient Church of St Angelo. It is located outside the town and next to the town cemetery. On the high altar are the simulacrum of Mary Most Holy of Carmel, and on the sides those of St. Elijah and St. Elisha, protagonists in past years of moving penitential processions.
Saint Elijah is one of the greatest prophets whose mission was to exhort people to be faithful to the one true God. He holds a sword in his hand to cut through the clouds and make the sun come out.
Hence, the people of Prizzi have asked for his intercession for good weather in the past. Saint Elisha continued the work of Saint Elijah, a wealthy landowner originally from Abelmeula, whose name, Elisha, means “God saves”. He holds a jug (“uglialoro”) that recalls his miracle of a poor indebted widow who saw the little oil she had at home multiply and fill all the jars she had collected. 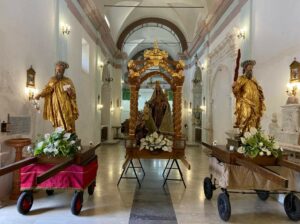 The people of Prizzese invoke him in times of severe drought to ask for rain. Behind the high altar is the fresco of Mary Most Holy of Carmel, with purgatory souls depicted at her feet. The painter and period are unknown, but a Greek-Byzantine artist might have painted it. Opposite the side door is a sepulchral monument of the founder Geronimo Graffeo, depicting a closed helmet warrior with near oak leaves. Inside the church are tombstones with inscriptions in Latin and Italian. 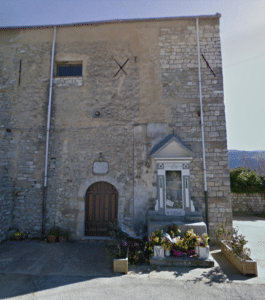